Moss, lichen and rust, my three favorite patinas (a reflection on temporality) 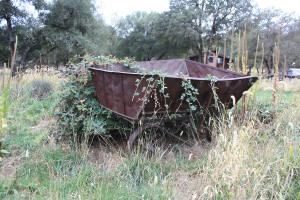 Looking out on our ever-unfinished landscape, I reflect briefly on how little my wife and I have managed to accomplish, in the decades we’ve lived on our land.  We’ve built a house and done a little tree-clearing, where the crowded oaks were clearly overgrown and where we needed to create an opening to see the distant hills, and catch a glimpse of the morning sun rising, at least from spring through fall.  Aside from that we have done very little, particularly for landscape architects, who tend, by profession, to be meddlesome.

But one brilliant thing I did, I think (though perhaps my wife may not agree) lo those many years ago, was to purchase a truckload of old farm implements from a rancher in the Central Valley.  I’d had a flash of near-blinding brilliance, or so I thought at the time.  The 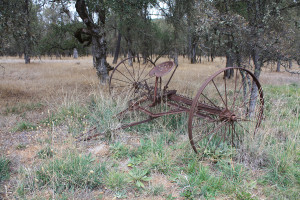 implements, which had long intrigued me, particularly the drop-rakes with their big metal wheels and large swooping tines, seemingly built to be pulled by mule, were, I thought, gorgeous as well as evocative.  They were visually striking and I believed they told a story, of the land and of the farmers who for generations worked it.  We had meadows on our property which grew nothing but dry grasses which turned to fire hazard in mid-summer – why not use those fallow meadows as a canvas on which a piece of old farm equipment could be placed, and displayed, and its story shared?  And I thought that surely if it worked as well as I’d expected others would surely want old farm equipment placed in their fallow fields and maybe this would become a centerpiece of our landscape architectural design work, maybe we could even make money buying and reselling some of this fine old stuff.  So I talked Ellen into letting me 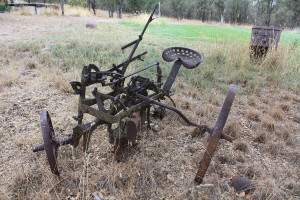 buy a truckload of old equipment, not just drop rakes but a mining cart and an Emerson plow and a big old potato wagon and some stuff that I had no idea what it was.  And of course once we set the stuff out in open areas all across our land, just to see how they all would look, they never moved again.  And I love them all.  The patina on the pieces grows ever-richer, flecked on their shaded, rusted flanks with lichen.  The grasses grow up through them, the berry vines even threatened at one time to consume the old potato wagon altogether before I went out with a weedeater to do some intervention.  And one day an old bull, seeking respite from the heifers next door, escaped to our place and knocked a wheel off the big old Emerson plow scratching himself appreciatively against it, causing the plow to repose at a rakish angle into the soft earth. 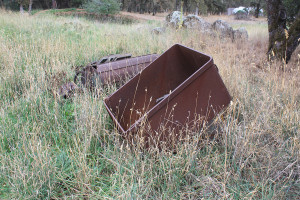 And so the earth, slowly, is reclaiming the farm equipment as it will one day reclaim us all.  And the rusted, patinaed metal endures as the farmers endure, as we all endure, heroically, ultimately futilely, and those old pieces of farm equipment continue to tell their magnificent story day after day in the golden afternoon light.  And blue birds light briefly on the pieces before flying on, not taking any sides.  And the sun rises and sets, and the patina deepens, and it all becomes, day by day, almost more beautiful than I can bear.